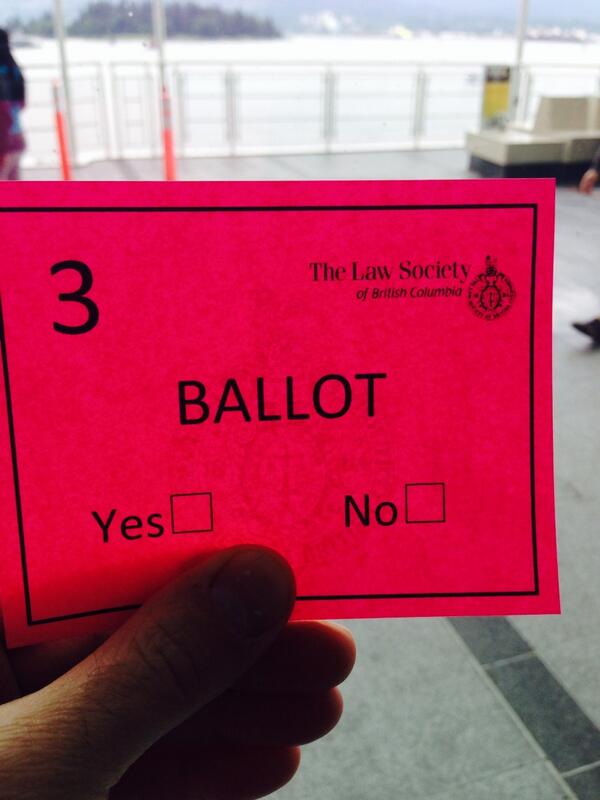 On June 10, rank and file members of the Law Society of British Columbia voted to require their elected Benchers to reverse course on Trinity Western University’s bid for a new faith-based law school.  According to s. 13 of the B.C. Legal Profession Act, the vote is not binding on Benchers, at least for a grace period of 12 months.  If the Benchers do not implement the resolution within 12 months, they face the prospect of a referendum to be conducted in accordance with poll rules identical to that of a Bencher election, under art. 1-37 of the Law Society Rules (p. 27).  Such a referendum requires a supermajority (66%) of a sizeable quorum (33%) of B.C. lawyers.  The vote, 3,210 in favour and 968 opposed, was uncannily similar to the 4,000-member quorum.

Resigned to failure, the B.C. Law Society must pull up its socks

B.C. Law Society President Jan Lindsay, in a press release issued shortly after the passage of the resolution, stated, “Ultimately, I fully expect that the issues raised will be decided by the Supreme Court of Canada.”  The tone of resignation, implying that Benchers will be compelled to reverse its decision and also that TWU will not budge on the controversial clause in its student covenant, indicates the wrong course in a file that has been charted from the outset by missed opportunities and polarized views.

If the Supreme Court were compelled to rule one way or the other, the decision would marginalize one of two legitimate groups protected under our constitution at a time when both are striving to participate in mainstream life and civic discourse.  Such a result could not be in the public interest.  As I stated in my previous post on the role of judicial authority in Canada’s democracy, a theory of constitutionalism that relies too heavily on social trends can swing back tomorrow against the group enjoying victory today.  Dragging an imaginary line back and forth on the basis of shifting constitutional values can only have the effect of scarring the legal landscape.  That is no way to make a coalescing democracy work.

Instead of being resigned to litigation they thought they could avoid, B.C. Benchers now have a 12-month opportunity to untie the Gordian knot.  Now is not the time to be eyeing the Supreme Court.  Now is the time to start negotiating a path for TWU to fulfill its aspiration of joining the Canadian legal academy.  During the heat of debate leading up to the meeting of B.C. lawyers, there may have seemed to be little hope of a negotiated solution.  Upholding the rule of law now means finding a solution, out of court.

Both sides have been wrong (and right)

Commentators on each side has accused the other of bigotry.  Each’s accusation is well-founded.  There has been intolerance, triumphalism and wounded identity on both sides.  Fortunately, the extremism is not representative.  Let us restart the dialogue, see past the war of words, and see how better the two sides can understand each other.   In her 2010 paper on peacemaking in a ‘Culture War,’ Prof. Jennifer Brown offered three pathologies of mishandled conflicts between advocates of religious freedom and gay rights in the United States, as well as methods of resolution.  She argued that the barriers to understanding were not insurmountable.

The flaw in the approach of most opponents of TWU’s bid has been to consider the university’s home church and community as a monolith. It is hard for many who have not been raised or educated with religion to understand the importance of faith to those who hold it.  It is also hard to imagine how much room for negotiation there is within any Christian community.  As TWU President Bob Kuhn stated in a recent interview in Faith Today, on-campus discussion about the law school has been informed by “a broad diversity of views.”  This may surprise some, but it should not.  Lindsey Mayhew, the 2014-2015 Managing Editor of TWU’s school newspaper, the covenant in its current iteration is at odds with a gay-friendly campus must continue to be reformulated.  In an op-ed for The Province, she stated: “The covenant is an ever-evolving document; students used to not even be allowed to dance on campus!”  Mayhew represents a view on TWU campus that the university’s court challenges of Ontario and Nova Scotia law societies is a fight to be right which runs counter to the core mission of preserving a Christian perspective in the intellectual mainstream:

“The law school debate has perpetuated a lot of negative stereotypes about the Christian community, and it is a shame that the administration does not think about how this reflects on a student body who may or may not have quite the same belief system as them. The administration makes it out as if these law societies and gay rights groups are discriminating against us, without taking into account the centuries of oppression and hatred the church has shown toward gays in the past.”

All Christians must grapple with the presence in the Bible of pre-Christian moral codes and the advent of the Son of God as mediator of a New Covenant.  Under the existing morality, the main threat to the sanctity of traditional marriage was (rather axiomatically) adultery.  One of Jesus’ great acts of mediation was to stop the mob from stoning to death a woman accused of that crime.  This may not have been a condonation of adultery, but it did remind all present of the mediating effect of the doctrine of Original Sin.  If these “contradictions of truths” did not exist in scripture, there would be no need for a church or theology.  Every time one picks up a Bible is, from a religious perspective, an act of faith; from an intellectual one, an act of negotiation.

In this context, the accusation that scripture is a crutch for homophobia is not helpful, however handy the argument may be to score points.  The reality for the person of faith is that the scripture is what it is: that it is the word of God but also contains anti-social content troubles the soul of clergy and congregants in ways that do not keep secular ethnographers up at night.  This is a spiritual dilemma which commands Canadians to be compassionate, not judgmental.

The flaw in the TWU approach has been a failure to identify its negotiating partner.  It thought that partner was the Federation of Law Societies of Canada (FLSC).  The FLSC is a coordinating body of provincial law societies whose enabling statutes do not permit delegation of rule-making authority.  In this regard, TWU may be justified in holding the belief that it played by the rules and found out the FLSC was lacking in legal authority to negotiate accreditation.  (Welcome to Canadian federalism.)  Now TWU knows who the real players are.  Time for TWU and the law societies to sit down, with the help of stakeholders like the CBA’s Sexual Orientation and Gender Identity Conference (SOGIC, who actually want to support TWU’s law school bid).  The “big stick” approach of TWU’s litigation strategy has fostered an unfounded belief that the Canadian legal establishment is anti-Christian.  The narrative has characterized the FLSC as an impartial authority to which the law societies of Ontario and Nova Scotia are opposed.  The FLSC is not an authority at all, and never was one.

TWU would not be Canada’s first faith-based law school.  A very Catholic University of Ottawa was one of Canada’s two original law schools in 1887, the other being the secular King’s College, a.k.a. University of Toronto.  Ottawa’s law faculty, according to the official history, obtained a special pontifical charter from the Vatican to remain a Catholic university while allowing protestant examiners, professors, and students.  As a non-hierarchical Congregationalist Church, TWU does not have the facility of going to Rome to wave a magic wand over the Community Covenant to resolve the current impasse.  But – few have noticed – TWU did change the wording before.

Some, including the author of a recent guest post on the TWU blog, have argued the current wording is not discriminatory because it does not mention sexual orientation at all.  (The previous text, before the Supreme Court in 2001, did contain an express condemnation of homosexuality.)  One is free to disagree with this argument and the tone of the post, but from a dispute resolution perspective the questioning of whether the covenant does discriminate against gay law students must be seen as a significant step toward the negotiation of a wording which makes it clear (or clearer) that all are welcome.  SOGIC says it supports a Christian law school.  TWU says it does not intend to discriminate against gay students.  We will fail collectively as a legal profession if we cannot bring about an end to the deadlock.

The alternative, a Supreme Court ruling that alienates one group at the expense of another, is no victory even for the tactical winner of the legal proceeding.  In the 12 months from now, the B.C. Law Society, with the collaboration of the other legal regulators, must negotiate a way for TWU to join the legal academy.  In doing so, the legal profession in Canada could lead the world and prove that all men and women of good will can resolve their differences, however intractable they may seem today, or seemed to have been before now.